Ghostly Woman in the Yard

I’ve had many experiences in this area.  I grew up in the country. We lived in a farmhouse over 100 years old located very near to a cememtary which is a historical site of western PA. I had many experiences both inside and outside of the home.  Late one evening, in the fall, my 4 brothers and I were waiting on our porch landing for our parents to walk up from the driveway to unlock the door so we could go inside. The night was very clear and cold. While waiting, we were leaning against the porch railing and I was looking out into my yard. About 20 to 30 feet from the porch was a very tall, very old black walnut tree that my dad had hung a rope swing  with a wooden seat. Standing next to the tree, very apparent, was a female figure. She was semi transparent and sort  of glowing white-ish in a very long dress. She just stood there staring at me. I blinked my eyes several times but she was still there, staring silently and coldly. I turned to  my brothers and  asked  them if they saw her. They asked, “Saw what?” I said, ” The woman standing right there!” and pointed. They saw nothing. She just continued to stare at me. She did not move. I was terrified. It was not a good feeling that I felt from that stare. I said nothing to my parents but I did not sleep well that night. I cried because I was so scared and felt sick to my stomach. The next day I finally had the nerve to tell my dad, who I thought would just say I was imagining it, but thankfully and to my surprise he believed me. You see, he told me he had also had experiences as well but still to this day has not told me what. I was never comfortable in that house or on that property at night. From that day on, anytime I came up 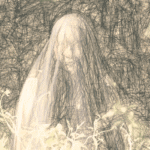 from the driveway I would avoid looking in the yard and run inside the house as fast as possible. Even after I moved away to college and got married with kids of my own and came home to visit, I still could never face the yard at night. I’ve never mentioned this to my brothers again but I have to my dad and he remembers it well. I saw the woman again a few years later but that’s a different story. One of many I have from living in a haunted house in western PA.  I remember them all vividly to this day over 20 years later.

This experience has been submitted by the submitter stated above and has accepted our disclaimer. The submission above has not been edited and has been posted as it was given to paranormalpymatuning.com.*